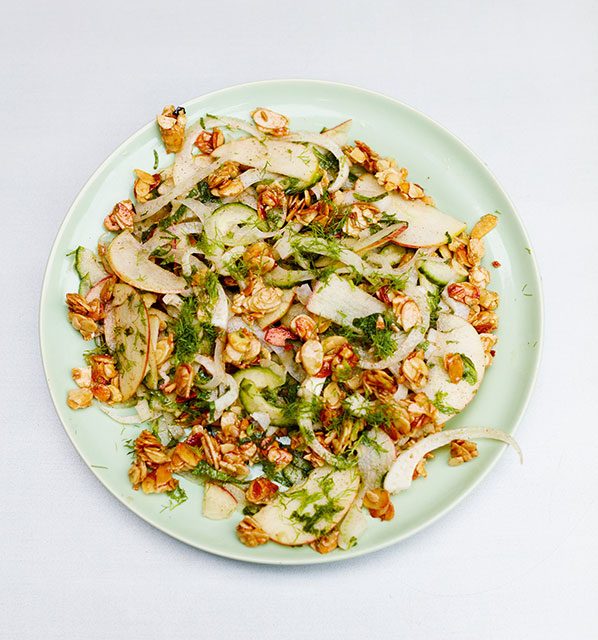 This crisp and clean bunch of ingredients, mixed with some warming sweet spices, works together as tightly as the rhythm section of James Brown’s funk band.

Serves 4 as a side

Grab a mortar and pestle, and bash the fennel seeds until they’re coarsely ground. Next, put a couple of tablespoons of oil into a frying pan over medium heat. When hot, add the almonds, stir-fry for a couple of minutes until they turn pale gold, then add the ground fennel seeds, ginger, honey, and 1/3 teaspoon of salt. Stir-fry for another minute until caramelized. Carefully tip onto a plate and leave to cool.

To make the salad, fill a big bowl with cold water. Cut the lemon in half, squeeze the juice into the water, then chuck in the lemon halves, to stop the fennel and apple discoloring. Very finely slice (or shave on a mandolin) the fennel and put it into the lemony water. Slice the apples thinly and add them to the bowl. Cut the cucumber in half lengthways, scoop out the seeds with a teaspoon, then slice it thinly and keep to one side.

Drain the fennel and apple really well, discard the lemon halves, and put the mixture into a serving bowl along with the cucumber and mint. To make the dressing, mix together 3 tablespoons of oil with the 2 tablespoons of lemon juice, garam masala, and ½ teaspoon of salt.

Crumble the caramelized almonds into the salad and pour over the dressing just before serving. Toss together using your hands or a pair of tongs, then serve. 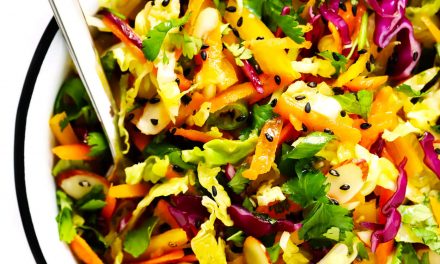 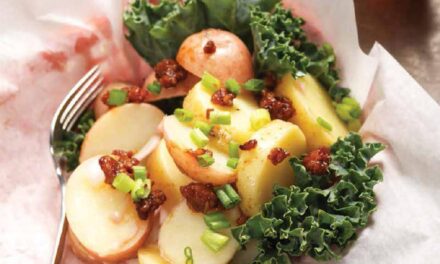 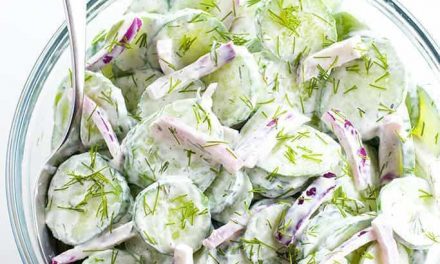 GET YOUR FREE COPY

You have Successfully Subscribed!

We use cookies on our website to give you the most relevant experience by remembering your preferences and repeat visits. By clicking “Accept”, you consent to the use of ALL the cookies.
Do not sell my personal information.
Cookie SettingsAccept
Manage consent

This website uses cookies to improve your experience while you navigate through the website. Out of these, the cookies that are categorized as necessary are stored on your browser as they are essential for the working of basic functionalities of the website. We also use third-party cookies that help us analyze and understand how you use this website. These cookies will be stored in your browser only with your consent. You also have the option to opt-out of these cookies. But opting out of some of these cookies may affect your browsing experience.
Necessary Always Enabled
Necessary cookies are absolutely essential for the website to function properly. These cookies ensure basic functionalities and security features of the website, anonymously.
Functional
Functional cookies help to perform certain functionalities like sharing the content of the website on social media platforms, collect feedbacks, and other third-party features.
Performance
Performance cookies are used to understand and analyze the key performance indexes of the website which helps in delivering a better user experience for the visitors.
Analytics
Analytical cookies are used to understand how visitors interact with the website. These cookies help provide information on metrics the number of visitors, bounce rate, traffic source, etc.
Advertisement
Advertisement cookies are used to provide visitors with relevant ads and marketing campaigns. These cookies track visitors across websites and collect information to provide customized ads.
Others
Other uncategorized cookies are those that are being analyzed and have not been classified into a category as yet.
SAVE & ACCEPT

You have Successfully Subscribed!